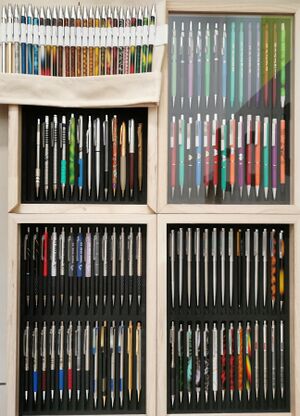 In the 1930s, China's light industry was so backward that it could not make its own pencils. In 1934, Wu Tongmei, a Chinese student in Japan, returned home to start construction of a pencil factory, the first pencil factory in China, the Chinese Standard Pencil Factory, which went into operation in August 1935. The first product was named 'Fei ji'.

Then, in 1937, the factory launched its new product, 'Ding', the first advanced drawing pencil. The pen is made entirely of Chinese ingredients: clay from Suzhou, China, birch from northeast China, graphite from Hunan, China. After the outbreak of the Anti-Japanese War, the factory turned to Wuhan, Yichang and many places, and finally landed in Chongqing.

During the Anti-Japanese War, the leadership of the factory split, General Manager Zhang Weiss, engineer Guo Zichun suggested that the factory move back to Shanghai, and Wu Tongmei factory director did not agree, and then Zhang, Guo two left the factory.

After the victory, Wu was received by Mao Zedong during the Chongqing talks. In 1946, the factory moved back to Shanghai to resume work, and the factory was on the verge of bankruptcy because of high inflation in the KMT-ruled region at the time.

From the mid-1980s to the early 1990s, factories began to develop Auto-Advance mechanism pencil, introducing products such as the A701,705. So far, China NO.2 Pencil Factory reached its peak.