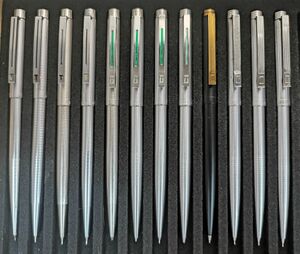 The THREE STAR 700 was first released in 1980. It's the first fine line mechanical pencil in China。

In May 1980, Shanghai Pen Industries visited Parker's plant in Wisconsin. During this time Parker proposed a number of possible cooperation projects with Shanghai Pen Industry Corporation, one of which was the manufacture of a fine line mechanical pencil core of the same size as the G2 ballpoint pen core(Schmidt Structure).

After the visit, The Shanghai Pen Industry Company handed over the task to its subsidiary, China NO.2 Pencil Factory, and successfully producted it at the end of 1980. Although the partnership with Parker was ultimately not reached, China NO.2 Pencil Factory did not abandon the project, but instead used it on the Hero 400 Ballpoint Pen produced at the Shanghai Ballpoint Pen Factory.To distinguish between the models of the ballpoint pen, its name is Hero 700.

Later, in 1981, The China NO.2 Pencil Factory began to produce its own barrels, at which time the model changed from the Hero 700 to the THREE STAR 700.