The Squire is the first pen offering from Baron Fig. The Squire was originally produced as a Kickstarter campaign that launched on November 10th 2015 CE [1]. The project successfully funded on December 10th 2015 CE and Baron Fig announced that the shipping was complete as of April 18th, 2016 CE. The Squire was initially put on sale to the public on May 17, 2016 CE. It is a rollerball pen with a minimal profile, which was compared to the Ajoto, another early Kickstarter-financed machined pen. The Kickstarter Squire shipped with a Baron Fig branded version of a Parker-style or G2 ceramic liquid ink rollerball in a .6mm size that had the phrase "The pen is a mighty sword" printed opposite the "Baron Fig" logo text, initially only in black ink, but a blue option would be added later as a successful stretch goal of the Kickstarter campaign. The Squire is 128mm long, weighs approximately 24 grams, and the median width is 10mm (the body tapers from the narrowest point near the finial the widest near the point) The Squire is made of aluminum and the refill is extended by a twist mechanism at the finial end of the pen. The twist mechanism in the finial is also the removable cap for replacing the refill.

There have been several standard editions and subscription editions

The standard edition Squires have a sword logo printed on one side and the words Baron Fig printed on the other and sells for $55US with a choice of black or blue ink refill.

The silver colored edition was part of the original Kickstarter offerings and is now a standard edition offering. 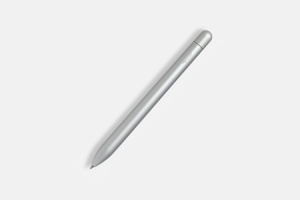 The charcoal colored edition was part of the original Kickstarter offerings and is now standard edition offering. 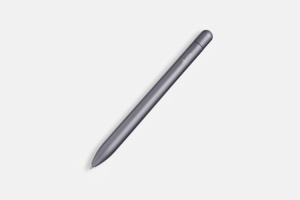 The Alphabet edition was the first of the planned quarterly subscription editions of the Squire pen released in the first quarter of 2017. It featured a matte black finish with each letter of the English alphabet in capital letters descending in order from A to Z starting near the finial and continuing to the point. The letters were printed in white. The Alphabet edition Squire omitted the sword logo from the standard editions but includes the words "Baron Fig" on the opposite side from the alphabet text. The Alphabet edition Squire sold for $60US with a black ink refill and shipped in a black cardboard tube with an outline of the pen on one side. 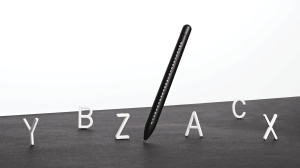