Parker Sonnet fountain pens and rollerball pens are ranges of pens made by the Parker Pen Company.

Sonnet Mk 1 fountain pens were first sold in 1993, in a thin and thick cap band depending on model. Its manufacture has been superseded by the Sonnet Mk 2, which has a uniformly sized cap band which is of medium width, not as wide or thin as any of the earlier Sonnet models. Both the Mk 1 and Mk 2 Sonnet fountain pens have several variants; some have solid 18kt gold nibs, some have gold plated trim, some have caps and shafts made with sterling silver and others with stainless steel & Brass, some are coated with lacquers or paints or other substances, and some are silver plated. 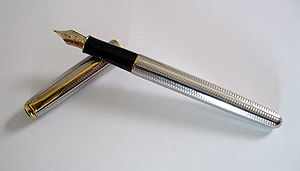 The Parker Sonnet was released as a successor to the long-running and dated design of the Parker 75, and before the subsequent release of the new Duofold was the flagship model of the Parker lineup. The pen was offered in a large number of variants, with models made out of coated brass, and some made out of precious metals. The lowest in line was made out of the sturdy Stainless Steel.

The middle in the series came with lacque finishes not made by Maki-e, but still have a flair to them, like the Firedance finish. They were generally made with a very thin cap band, but thick banded variants do exist.

The lowest in the series were made in simpler finishes and had gold plated or unplated Steel nibs. The bands offered in these were always thin.