On 1 April 1901 the Noris brand was signed up for registration and then registered at the Imperial Patent Office in Berlin on 10 September 1901.[1]

In 1955 saw the switch from orange to the typical yellow colour. By now the Noris also had the typical dipped end cap and was available in 5 degrees, from 2B to 2H. [4]

1985 saw the introduction of the HB imprint to HB Noris pencils. [5]

In 2015, Noris made it into the Guinness Book of Records: with a Noris colour, made from Wopex material. It was the longest coloured pencil in the world at the time of the record at 459.97 metres. [1]

In Barcelona, the Noris caused a sensation in 1989: On the occasion of the 120th international cartoon salon a giant Noris pencil was built. The obelisk beneath the structure is normally used as a guide for locals and visitors.[1] 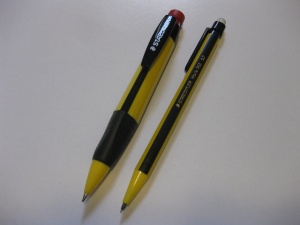