Difference between revisions of "Rotring 600" 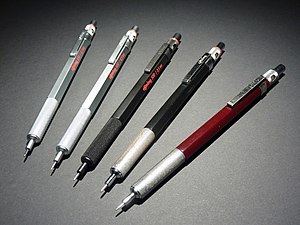 The Rotring 600 was first released in 1989.[1] Its design can be traced back to the preceding Rotring 500 series, which debut in 1985 with burgundy plastic barrels and metal knurled grips. The Rotring 500 is contemporary with the almost identical Rapidomatic series by Koh-I-Noor USA, which was bought over by Rotring in 1985. The Rapidomatic series of 'fine lead mechanical pencils' was a refinement from Koh-I-Noor's Select-O-Matic II 2.0mm leadholder, which is itself a refinement of the company's Select-O-Matic 5617 (1955–1984), which featured a hexagonal metal body, knurled grip and patented lead hardness indictor in the push button. The first version of the Rotring 500 did not have a 'red ring' around its lead indicator knob. 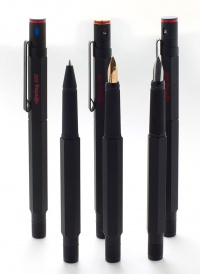 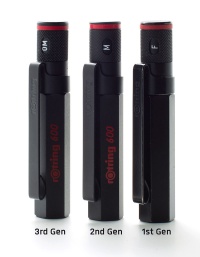 Over the years there have been different generations of the fountain pen version.

There is no printing on the cap or body. This generation features deep knurling, bevel above red ring 50% of height. This generation was only available in with a steel nib. Unlike later generations the nib indicator has no "L" setting.setting.[4].

Rotring 600 is printed on the cap. The knurling is not as deep as the previous generation. Bevel above red ring 30% to 70% straight. Rollerball and Gold nib versions were available. [4]

Rotring 600 is printed on the cap. A different colour was used for the print (RAL 3001). Features deep knurling. Bevel above red ring 50% of height, cap is slightly bigger then 1st and 2nd generation. Rollerball and Gold versions were available. 2nd or 3rd generation fountain pens without printing were initially sold via the Rotring branch that sold promotional items to be printed with the promoting company's logo.[4]

USA only, imported by Levenger, produced to Levenger's specifications in Japan. Not much information is available about this generation. The 4th Generation Second Wave has Levenger printed on the side. Additional silver holding lugs protrude from the grip.[4] A similar pen is still available from Levenger as a ballpoint pen, rollerball and fountain pen, as part of their L-Tech series. [5].

The Rotring 600 was also sold as a ballpoint pen, in either black or silver (matching trim) or with gold trim.[6]