Nock Co. is a manufacturer company based in Georgia, USA, with a focus on cases and bags for stationery. It was founded by Brad Dowdy, of Pen Addict fame, and seamster Jeffrey Bruckwicki. As relayed on their history page, the duo met for the first time on August 4, 2013, and their business was born two weeks later, on August 18[1].

On September 30 of that year, a Kickstarter campaign was launched to help fund the launching of their original product line of six types of cases. On October 30, the campaign was successfully funded at $78,662 -- well over their goal of $5,000 -- between 2,066 backers [2].

On June 25, 2014 the company opened their online shop to the public, with a new case style (The Fodderstack), as well as their first paper products: an A4- and note card-sized DotDash paper[3].

Nock Co.'s case products have thus far been named after geography specific to Georgia, USA, ranging from lakes to mountains, with one exception: the Karas Kustoms collaboration was named after the Superstition Mountains in Arizona.

Dowdy and Bruckwicki as founders and creators have very high standards of their own products, and are proud of their American-made aspect. When production of the cases grew to a scale that necessitated a third-party, the duo had a high bar, and kept producing their own cases until an undisclosed, American-based factory fit their standards.

When designing products, Bruckwicki will often take an idea he and Dowdy had talked about, and sit down with some chalk and fabric to rough out designs. As mentioned in their blog, Bruckwicki presented Dowdy an array of prototypes only two weeks after the pair had sat down to discuss product ideas in August 2013[4].

Bruckwicki's experience as a seamster and eye for design has allowed the company to quickly iterate through prototypes, playtest and use them, and tweak until a satisfactory design is finalized.

In June 2014, Nock Co. launched their online store, and expanded their product line to include a seventh case, and DotDash paper in two sizes (A4 and notecard).

Following are the product lines that Nock Co. has released over their history, alphabetically. The list groups size variants under the one product line (such as Fodderstack versus Fodderstack XL), and also includes items that have since been discontinued or put on a temporary hiatus since their initial release. Special edition products of already-established product lines are listed in 'Limited Releases' below.

This side-stapled pocket notebook was released as a limited edition to the Atlanta Pen Show 2016 Kickstarter. The run was limited to 1000 3-packs of orange (Pantone 7510) dotdash notebook, with Pen Addict embossed logo.

This side-stapled notebook was initially released as a limited edition, stretch goal for the Lanier Kickstarter campaign. The run was limited to 1000 3-packs of Kraft/Brown colorway cover dotdash notebooks, with Nock Co. embossed logo.[5] 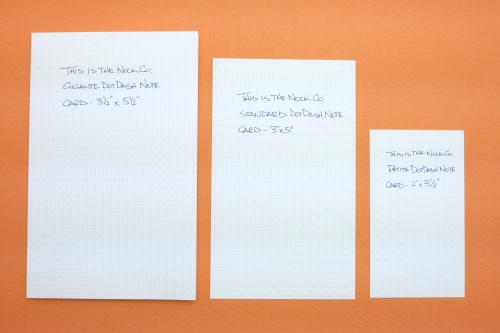 A collaboration with Mike Dudek of Dudek Modern Goods, the Idea Dock was first released in 2014 as a combination note card holder and pen rest. It also featured a thin cut out along the top front where a single note card could be displayed.

At the 2017 Atlanta Pen Show, version 2 of the Idea Dock was released featuring significant design changes. Instead of the single horizontal pen rest, there were now five vertical pen slots. Additionally, the note card storage area was moved from the side to the top. It retained the single note card display strip.

Nock Co. has released special editions of their products, for celebrations, Kickstarter incentives, and just to test out a new product line. Due to their industriousness, the list has been expanded to its own page Nock Co. Limited Releases.