Different Generations of the Lamy Safari

This change came in the mid to late 90's and was a big one. The clip, nib and feed remained the same but all other parts were redesigned. The Lamy logo and nib size were added to the nib via laser-etching. The barrel was changed from one part to two. The cap and cap ring were combined into one part. The cap asembly was redesigned to snap together, eliminating the machined top screw and cap nut. I believe this redesign was done as a cost-saving measure. The price of these pens has changed very little in nearly 30 years and this redesign allowed Lamy to lower the manufacturing cost. Total number of parts went from 14 down to 11 and they eliminated two costly machined parts. All done without really altering the appearance or quality of the pen - not bad. The original white pen disappeared, a textured grey was introduced and followed by many LE colors. The demonstrator exists in this generation too but it went away when the Vista was introduced.[4]

Red body with yellow clip and yellow cross on cap.[5] 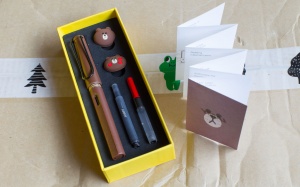 2017 Pirates of the Caribbean

Like the Petrol edition, but comes with a skull on the clip, a pen roll and a box. [7]

A Lamy Safari in black (matte type) with the Line character’s name BROWN embossed in the cap. Comes packaged in an aluminium tube.[8]