Kores is a leading international brand of school and office products best known for solid glue sticks, dry correction tapes and Kolores coloured pencils. Kores was founded in 1887 by Wilhelm Koreska, the great-grandfather of Clemens Koreska, the current president of Kores Group. The worldwide HQ of Kores is based in Vienna, Austria and its main offices are in Czech Republic (Prague), Germany (Rommerskirchen), Mexico (Mexico City), Colombia and Venezuela. Kores has 2 key production facilities in Mexico City and Strmilov (Czech Republic). The iconic Kores dactylo was also portrayed on the cover poster of the Pedro Almodóvar’s movie "The Flower of my Secret".

In the first part of 20th century, Kores expanded to become one of the world’s first globalized companies that produced chemical office products such as carbon paper, in countries as far and wide as China and Egypt. Kores had its own company magazine, Kores Revue, and an official sales handbook on how to sell carbon paper, which are displayed at the Kores museum display at the Vienna HQ. Following a decline in carbon paper sales due to changing office technology, Kores began focusing on the production of glue sticks and correction products from the 1990s, expanding into the new markets of Eastern Europe, as well as supplying global businesses in Western Europe and the United States. 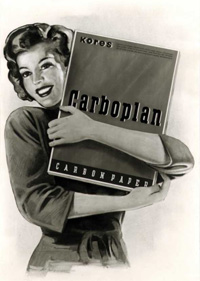 By 2010, Peter and Robert Koreska had purchased back the Kores trademark rights for the key markets of Germany, France, Italy, United Kingdom, Netherlands and Scandinavia, thereby optimizing the Kores brand distribution potential. In the same year, Kores Germany launched a complete program of printer consumables, including laser toners, ink jet cartridges and typewriter ribbons, which are offered to the international Kores network of customers. In 2016 Kores celebrated 20 years of production at its Strmilov production plant. In 2017 Kores celebrated 130 years anniversary!

In 2014 Kores was awarded with the Austrian Ecolabel. Now the glue sticks, produced in millions at the Kores factory in Czech Republic, can proudly carry the quality label awarded by the Austrian government. For more than 20 years the Austrian Ecolabel marks environmentally friendly products and services and thus provides guarantee to the customers.